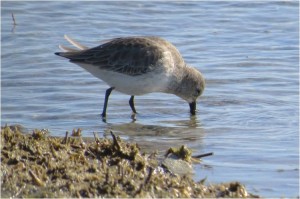 It’s Official! City of Raleigh Turns Out Lights for Birds

i Nov 25th w No Comments x by Gerry Luginbuhl

On November 2, 2015, the City of Raleigh Public Affairs Departments announced that, in collaboration with Wake Audubon, the City of Raleigh is implementing bird-friendly lighting strategies for City-owned and operated buildings. In doing so, Raleigh is the first city in North Carolina to reduce lighting on City owned and operated buildings to reduce bird collisions.

We are proud of our Wake Audubon citizen scientist volunteers for their passion and commitment to our Lights Out monitoring. City of Raleigh Sustainability Manager Megan Anderson was eager to understand our monitors’ findings, and work with Wake Audubon and stakeholders to script specific practices for city owned and operated buildings to save migrating birds – AND reduce energy consumption and costs, while maintaining pedestrian safety and security as utmost importance.

We applaud Megan Anderson and team, our city leaders, building managers and all stakeholders who were very supportive and happy to participate in this program. It has been a fantastic collaboration and partnership. Special thanks to organizers Lena Gallitano, Elaine McManus and John Little, and volunteer monitors for their early morning, pre-sunrise time downtown, all of whom enabled this achievement.

WRAL.com: This idea’s for the birds: Raleigh to dim building lights (link to: http://www.wral.com/this-idea-s-for-the-birds-raleigh-to-dim-building-lights/15055065/ )

WUNC: Raleigh to Turn ‘Lights Out’ After Hours to Protect Migrating Birds (link to: http://wunc.org/post/raleigh-turn-lights-out-after-hours-protect-migrating-birds#stream/0

Evidence shows that artificial lighting can have dire consequences on myriad species of migrating birds that fly after the sun sets. Normally they rely on natural lighting – stars and constellations – to guide their journeys. Yet, indoor and outdoor urban lighting can confuse their sense of steering. Birds become disoriented and collide with lighted structures. Poor weather conditions like fog or rain causes birds to fly at even lower elevations, and exacerbate this circumstance. Bird friendly lighting practices have been successful in other cities like Toronto and Chicago where these have been implanted, both to reduce bird fatalities, and energy consumption and operating costs.

As environmental stewards, and citizens of Raleigh, we were interested to know the impact of Raleigh’s growing skyline on migrating species, and work with our leaders to implement similar practices.

Volunteers from Wake Audubon Society began surveying buildings in downtown Raleigh in fall 2013. This citizen science project followed the National Audubon Society developed protocol for Lights Out programs. Data was collected daily beginning at 6:30 AM from, March to May and September to November in fall of 2013, spring and fall 2014 and spring 2015.

More than 2 dozen Wake Audubon volunteers walked in teams of two to conduct the Wake Audubon Lights Out surveys. We had a number of inquiries, and positive interest, from citizens who began to recognize our volunteers during their early morning monitoring.

Data was collected by buildings when birds were either found dead, injured or stunned. Monitors collected more than 100 dead or injured birds. It is insightful to see the species that were most commonly found.

Our native year-round birds, for the most part, seem to have adapted to living with buildings in an urban habitat, though we did find mourning dove, woodpecker, blue jay, house wren, eastern towhee, sparrows, cardinals and more in low numbers.

Common Yellowthroat, ovenbird, white throated sparrows and two species of thrush – Hermit and Wood Thrush – were found in the largest numbers. Wood Thrush is a species of concern in North Carolina because of their decreasing numbers.  Chimney Swifts, another bird found at several buildings, has been Wake Audubon’s ‘Bird of the Year’ 3 of the past 5 years (Gerry – link ‘Wake Audubon’s Bird of the Year’ to http://wakeaudubon.org/initiatives/conservation/boty/) – and will be the Audubon NC Bird of the Year for 2016 – due to their declining numbers.

In reviewing the data, it was clear that the building where most dead birds were found is the Duke Energy Center for the Performing Arts. The Raleigh Convention Center and Wake County Justice Center followed.

We approached Raleigh City Council and City of Raleigh Sustainability Manager Megan Anderson with findings. Raleigh already has a progressive mission of conserving and protecting our environmental resources through best practices and cutting edge conservation and stewardship.

Our research enabled Megan and team to script win-win policies to both save birds and reduce energy consumption and operating cost at city-owned and operated buildings while maintaining pedestrian safety as of utmost importance.

The Shimmer Wall on the Convention Center is iconic for Raleigh and also a street side lighting source. Wake Audubon did not identify this as contributing to bird deaths, and the Shimmer Wall will stay lit.

What we hope from this

With the City taking the first step, we believe that the managers of privately owned buildings will be more open to implementing similar efforts, resulting in even greater benefits. With City staff and Wake Audubon working together, Raleigh can serve as a model for other cities in North Carolina to implement bird-friendly lighting strategies.

How everyone can help

Help to make the skies darker during migration system:

Turn off lights outside your home, especially upward-facing lights.

Turn off inside lights when not in use; close blinds and curtains at home and before leaving your office for the day.

If you work in an office building, ask your employer to turn out exterior upward-facing lights, as well as interior light from 11 p.m. to dawn. If necessary to maintain interior lighting, draw shades to diffuse lights to lessen their brightness to the outdoors.

Together, we have put up 10,000 new Brown-headed Nuthatch nest boxes!

In 2013, we asked for your help to provide a good home for Brown-headed Nuthatches near you. Today, thanks to YOU, North Carolina has 10,000 more nest boxes to support this priority species.

This was a tremendous goal, and we met it in just two years! When Audubon North Carolina’s network comes together, we are able to make significant strides in bird conservation.

With amazing collaboration from individuals, Audubon Chapters, the Eastern Bluebird Rescue Group and bird stores across our state, we’ve been able to help this squeaky, southern bird find more places to call home and raise the next generation of nuthatches.

Learn about how our Chapters make a huge impact on this goal!

We met this amazing goal, but our work doesn’t stop at 10,000. As bird lovers, we need to create even more places for this squeaky little bird to call home as our state faces the growing impact of climate change.

During our campaign to put up more homes, we learned from Audubon’s Birds & Climate Change Report that 95% of the Brown-headed Nuthatch’s current summer range could be highly stressed by climate change by 2080. From 2 to 200 to 2,000 – every nest box installed helps build more bird-friendly communities across our state and helps this tiny southern bird find a home as our climate changes and their ranges shift.

Thank you again for welcoming the Brown-headed Nuthatch to your yard. Our southern hospitality is evident for this charming little bird.

DON’T REST NOW! We’ve still got more to do!

Now we need to monitor how all those nest boxes are being used. The next important step is to share your data! If you haven’t entered your nest box location online already, visit www.nestwatch.org. As breeding season gets going, enter data for any birds that nest in your box — House Wrens and Carolina Chickadees as well as Brown-headed Nuthatches. Even if you have only one or two observations to report, please share them so we can get a better idea of how our birds are doing. If you have trouble getting your data in, contact Kim Brand at kbrand@audubon.org.

i Nov 9th w No Comments x by Gerry Luginbuhl

Eugene Hester is a talented writer, photographer and teacher. He lives in Wendell, not far from the swamp where his story is set. He introduces his picture book: I visit him there. He and I have been friends for more than seven years. We have developed a great relationship. When I call, he comes and I give him a fish. This is the story of how this amazing and trusting relationship developed between a human and this beautiful bird.”

Illustrated with the author’s beautiful photos, this gentle and true story will delight the whole family.  Available from local bookstores (support local!)  and Amazon. (Remember to use smile.amazon.com with Wake Audubon as your designated non-profit.) and gouache for 7-12 year olds illustrating the natural world.  by Bob Palmatier

Bob Palmatier is a science teacher, artist and the author of a series of children’s picture books about our endangered North American turtles.

Nature Illustration for Kids is a delightfully illustrated book full of ideas and techniques to use indoors, as you learn the art of illustrating natural subjects.