This is a report on a joint field trip between NC State Museum of Natural Sciences and Wake Audubon. We visited the following areas between November 17th and

Sunset on the Scuppernong River at Pocosin Lakes Visitor Center.

All photos by Jeff Beane. The dune-sheltered maritime forest and interdunal freshwater ponds at Nags Head Woods provide unique habitat for species like the Southern Cricket Frog, which are common on the mainland but unable to survive on most of the Outer Banks. Red-bellied Cooter at ARNWR. This species reaches the southeastern edge of its range in northeastern NC. Yellow-bellied Sliders, like these basking at Pea Island, are one reptile species that can often be seen on sunny days throughout the winter. Sunday was warm enough for this Brown Water Snake to be out basking at ARNWR. Tundra Swans, like these at ARNWR, are just one of many wildlife spectacles that our large coastal refuges have to offer. This female King Eider at Pea Island was by far the rarest and most unexpected find of the trip! Laughing Gull on the beach at Nags Head. 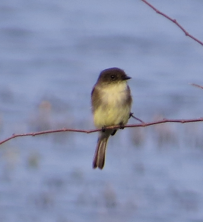 Northern Mockingbird in the dunes at Coquina Beach Bears! How fortunate that there are still places left for American Black Bears in our world, and the Albemarle Peninsula is one of the best. They were a focus of our trip, and the group was afforded a few good looks. A Red Wolf at Alligator River NWR was a lucky sighting! [Not all species were seen by everyone in the group, and some group members may have seen species not listed above. Some additional species were potentially glimpsed or heard but not positively identified (e.g., Spotted Turtle, Blackpoll Warbler, et al. may have been glimpsed; glimpsed road-kills may have included Gray Fox, Eastern Cottontail, et al.).]