i Apr 10th w No Comments x by Gerry Luginbuhl

Authored by Erik Thomas and Liling Warren.  All photos by Liling.

On March 27, board members Erik Thomas and Liling Warren traveled to Robeson County to conduct some bird counts.  The bird counts were for two projects, monitoring of the Lumber River Important Bird Area (IBA) and the NC Bird Atlas.  The Lumber River IBA has pre-designated stops along local roads at which counters list all birds seen or heard within a ten-minute period, with notes on how far away each bird was and when during the ten-minute period the bird made itself known.  All of these stops lie in the lower part of the watershed of the Lumber River.  The NC Bird Atlas, conversely, has all of North Carolina divided into rectangular blocks of land whose edges are several miles long.  The aim of the NC Bird Atlas is to document breeding and wintering birds found in each block.  One sixth of all the blocks are designated as “priority blocks,” those in which a more concerted effort is to be made in order to complete a thorough inventory of birds that dwell there.  Observations of breeding behaviors are especially important.  The ten-minute time limit does not apply to NC Bird Atlas counts.  However, counting for the NC Bird Atlas will take place from March, 2021, through February, 2026, whereas the Lumber River IBA is a continuous project with no set termination.

The two counters spent the morning counting at Lumber River IBA sites.  Because these spots all lie in bottomland areas, the birds that occur there are those that occur near water, along rivers or in swamps.  We found a Blue-gray Gnatcatcher nest, frescoed with lichens as is typical of that species.  White-eyed Vireos were already back from the tropics and singing.  We did exceptionally well with warblers, coming across eight species: Black-and-white, Prothonotary, Common Yellowthroat, Northern Parula, Pine, Yellow-throated, Yellow-rumped, and Prairie.  It was surprising to see Prothonotary Warblers so early in the spring, but apparently they now reach the southern part of the state, where Robeson County is situated, in late March. In the afternoon, we shifted to counting on upland sites for the NC Bird Atlas.  Chipping Sparrows and Eastern Bluebirds were plentiful.  We also encountered a pair of Loggerhead Shrikes and a Horned Lark.  The most exciting find of the day, however, was a Swallow-tailed Kite that was heading northward as we stood in the Marietta Cemetery. Swallow-tailed Kites are magnificent birds—and virtually impossible to mistake.  You can enjoy some of Liling Warren’s fine camera work of the kite and other birds here.  For the entire day, we completed 21 counts, 10 of which were at Lumber River IBA sites.  We entered all 21 in the NC Bird Atlas, and of those, 12 were in priority blocks. 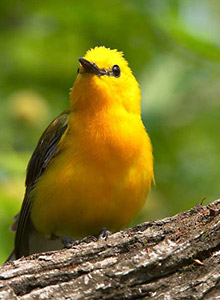